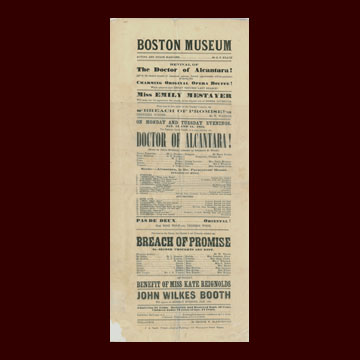 A Broadside featuring information about a John Wilkes Booth performance.

While mostly devoted to descriptions and cast lists of a scheduled comedy and the opera bouffe, Doctor of Alcantara! near the bottom the bill announces that “John Wilkes Booth / will appear on Monday evening, Jan. 19th.” (he premiered as Richard III and remained in Boston over a month; one performance prompted his brother Edwin to write “I am delighted with him,” while admitting Wilkes needed “time and study [to] round his rough edges”). The bill also lists a “Benefit of Miss Kate Reignolds”, who would appear with Wilkes in Breach of Promise.  A comedy in two acts, that debuted in 1832.

Booth was adored in Boston, and the Boston Museum once proclaimed that “the EXTRAORDINARY FURORE excited by this Young Artist’s histrionic efforts has never been equaled by any star.”