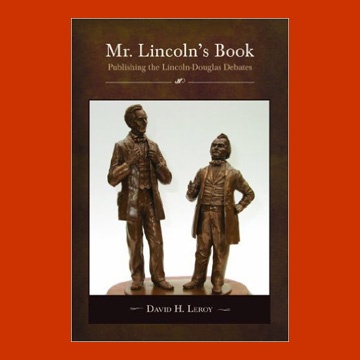 The Publishing of the Lincoln Douglas Debates

David Leroy’s Mr. Lincoln’s Book is first ever, a detailed account of the publication process of the Lincoln Douglas Debates; focusing on Lincoln’s personal involvement in the process.

Leroy unites the full story line with original correspondence, contemporary newspaper accounts, and photos and illustrations of the day. Lincoln, a popular politician was deeply thankful for the support of his friends, neighbors, and colleagues. He was pleased to sign or give copies of the book to his most active supporters. These became treasured mementos to all who received them.

This is the first census of all known signed copies of the Debates which, under David Leroy, has grown to a total of 42 copies. The recipient’s role in Lincoln’s life is documented, as is the book’s provenance and present location. Profusely illustrated with photos of many of the inscriptions, the book details the publishing history of a book Lincoln so ardently wished to see printed–perhaps his only claim to authorship of his own book.  Also included is a CD containing other correspondence leading to the publication.