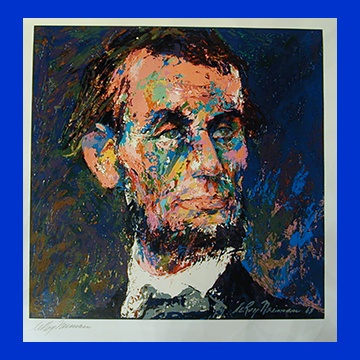 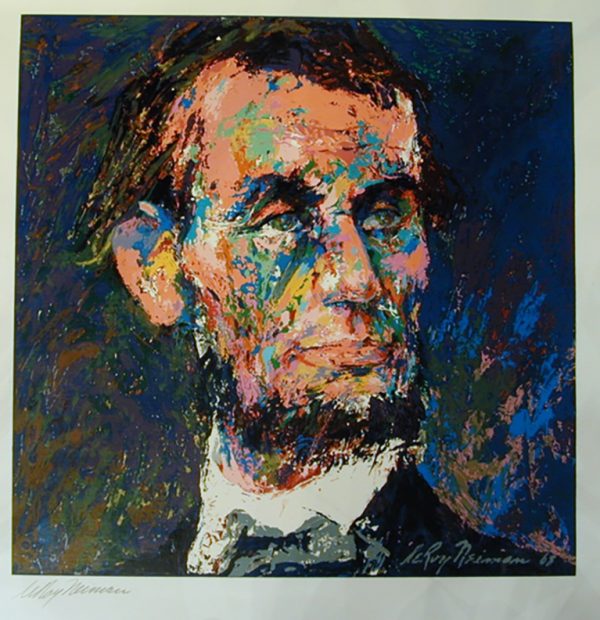 A Colorful Lincoln, By a Colorful and Prolific Chicago Artist

Leroy Neiman’s popular Serigraph of Abraham Lincoln was initially commissioned as an oil painting, once on loan at the Abraham Lincoln Book Shop, Inc., is now in the Abraham Lincoln Presidential Library and Museum in Springfield, IL. It was based on a study of Lincoln photographic images and biographical literature and married to Neiman’s unique perspective.

Neiman faithfully captures the strength and intensity which Lincoln exudes in Anthony Berger’s image taken at Brady’s Washington Gallery on Tuesday, February 9, 1864 (Ostendorf #91). In 1968, the oil was reproduced by serigraph on a finely embossed heavyweight paper stock suitable for framing. Twenty-six screens were meticulously hand cut and each color were individually applied to faithfully capture the tonal values of the original work. Indeed, this layering produced a print that mimics an oil painting.

As new; housed in its original protective paper folder.

Best known for his brilliantly colored and energetic images, Neiman is one of the most popular and widely recognized American artists, having studied and then taught at the Art Institute, Chicago. So devoted to his alma mater that he and his wife donated three million dollars to the SAIC’s scholarship fund and five million dollars to fund the construction of the LeRoy Neiman Center. The Center houses amenities for students including street-level gallery space, a café and lounge, and meeting areas for student student-led organizations. It is the first dedicated campus center in the school’s history, and the light-filled, two-story space will serve as a lasting example of Neiman’s passion for supporting young artists. As part of another Chicago institution, Neiman did many illustrations for Playboy magazine. In 1957, Neiman, a copywriter, met Hugh Hefner, a high fashion illustrator. Both worked at a Chicago department store. Neiman contributed a Femlin cartoon for every issue until 2017. He also did other works similar to this one; landing on the cover occasionally. With an Impressionist quality– but very modern–his bright and bold palette caught the spirit of the era perfectly.