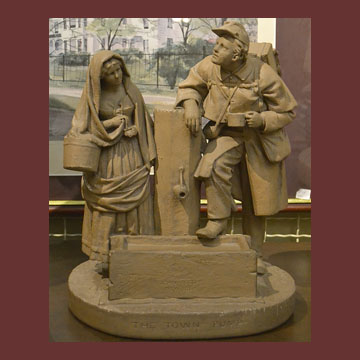 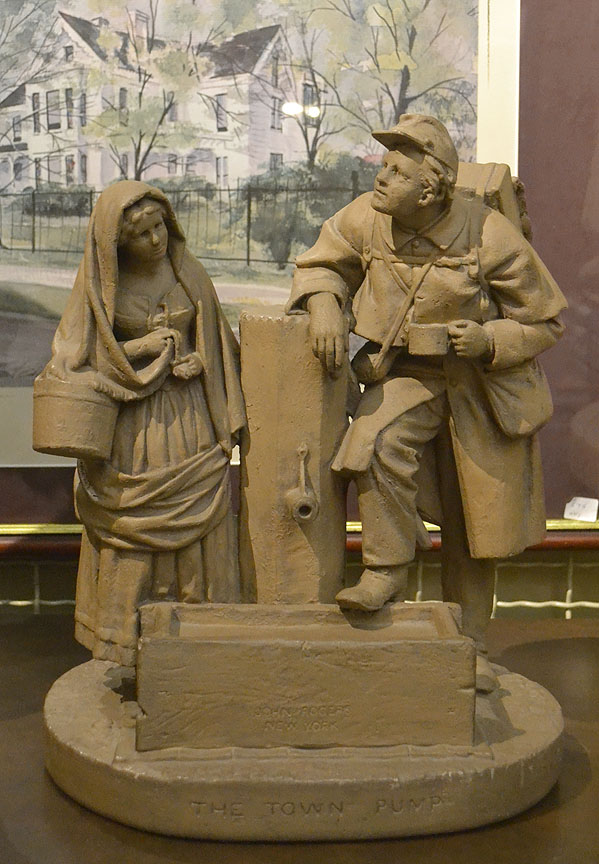 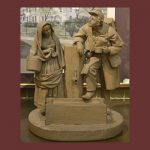 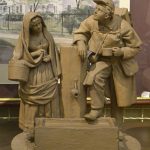 New Price – We Need the Space!

In this Rogers Group, named The Town Pump, A soldier who has stopped at the town-pump for a drink, meets a girl who comes with her pail for water, and has a talk and flirtation with her. Some thought a more sordid purpose of their meeting, however her cautious demeanor around the soldier tell a more innocent story. It is based on an earlier Rogers Group called Country Courtship. the early version began as a scene of courtship, suggesting the beginning of a relation leading to marriage, but his new group showed merely a lighthearted chat.

Part of Rogers’ Civil War series, The Town Pump struck a chord with the many people who had seen a young man off to war. There are two versions on this grouping. The canteen is either in the front or, like this one, on the side. The Smithsonian Art Museum and Yale University Art Gallery both have this sculpture in their collections. Modeled in clay by Rogers himself; then cast in bronze. From the bronze, molds were made. The groupings would then be cast in plaster.

Rogers became one of the 19th century’s most popular sculptor, producing over 80 works, mainly of everyday life; 12 were on Civil War themes.

The clay and plaster statue groups made by John Rogers (1829-1904) from 1859 until 1892 were so appealing in late Victorian America that “scarcely a family of reasonable means and taste did not possess one.” John Rogers portrayed ordinary, everyday, urban and rural people doing ordinary, everyday things. Through his Rogers Groups he offered an unrivaled transcript of the manners, sports, amusements, social customs, domestic interests, costumes, and even modes of furnishing of the period. John Rogers made statues of Civil War soldiers, family groups, literary topics, theater scenes and historical figures. His statues ranged from eight to forty-six inches tall.  Between 1860 and 1893 John Rogers sculpted approximately 85 different patented groups of statuary.  During that period, some 25 workmen in his New York factory turned out thousands of plaster castings of his works.  Of some subjects executed by John Rogers, only a few copies were cast and sold.  Of others, thousands were sold. In John Rogers’ 30 year career, the artist sold over a million dollars of sculpture, a lot of money for art in those days.  It is estimated that a total of 80,000 “ 100,000 casting of his groups were produced during John Rogers’ lifetime.  By the 1880s, it seemed that families who did not have a John Rogers Group were not conforming to the times. John Rogers statuary were moderately priced, averaging $14.00 a piece. Roger’s sculptures became a nationwide vogue, and were seen in virtually every art and bookstore window. The appearance of a new John Rogers was a major event covered by reporters from the nation’s newspapers.