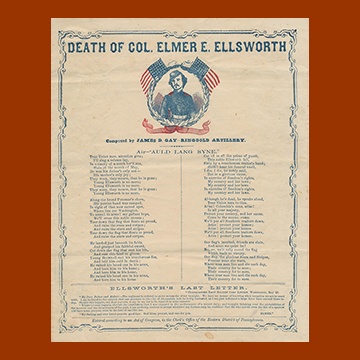 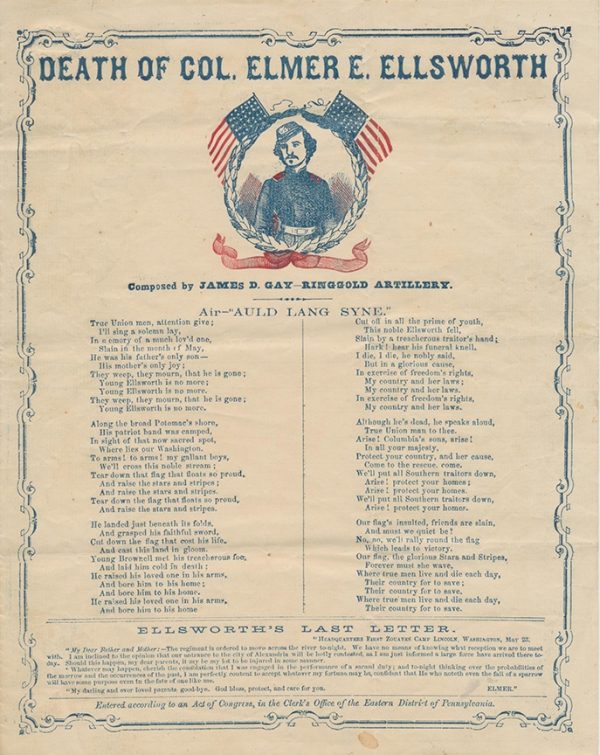 “The Greatest Little Man I Ever Met”–Abraham Lincoln

A Songsheet immortalizing Elmer Ellsworth, the first Union officer to die in the Civil War, as well as a close and personal friend of Abraham Lincoln.

Printed in two columns, the song is set to the tune of Auld Lang Syne. A red, white, and blue-colored woodcut portrait of Ellsworth surrounded by laurels and American flags graces the top.  At the bottom is a typescript of “Ellsworth’s Last Letter” written to his parents, written from “Head Quarters, First Zouaves, Camp Lincoln, Washington, May 23.”  A decorative border encompasses the whole. The nation (at least in the North) was gripped in sorry over the death of the very first officer to die in the Civil War.  Memorials such as this were purchased as quickly as they could be printed. James D. Gay was the author of several other Civil War songs, including Abe Lincoln’s Battle Cry, Gettysburg,  and Death of President Lincoln.  We are unable to find any copies in the OCLC.

Born in Pennsylvania in 1837, Elmer Ellsworth moved to Springfield, IL in 1860, taking a job as a law clerk in Abraham Lincoln’s office. The young clerk and Lincoln became friends; truthfully more like family. When the president-elect moved to Washington in 1861, Ellsworth accompanied him. After Ellsworth was killed removing a Confederate flag from The Marshall House, Lincoln eulogized him as “the greatest little man I ever met”. After his death, Ellsworth’s body lay in state at the White House. The phrase, “Remember Ellsworth”, became a rallying cry and call to arms for the Union Army.