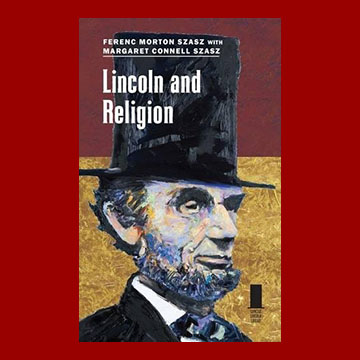 In Lincoln and Religion Ferenc Morton Szasz and Margaret Connell Szasz offer together bring us an accessible survey of the development of Lincoln’s religious views. After surveying Lincoln’s early childhood as a Hard-Shell Baptist in Kentucky and Indiana, the authors chronicle his move from skepticism to participation in Episcopal circles during his years in Springfield, and, finally, after the death of son Eddie, to Presbyterianism. They explore Lincoln’s relationship with the nation’s faiths as president, the impact of his son Willie’s death, his adaptation of Puritan covenant theory to a nation at war, the role of prayer during his presidency, and changes in his faith as reflected in the Emancipation Proclamation and his state papers and addresses. Finally, they evaluate Lincoln’s legacy as the central figure of America’s civil religion, an image sharpened by his prominent position in American currency.

In assessing the enigma of Lincoln’s Christianity, the authors argue that despite his lack of church membership, Lincoln lived his life through a Christian ethical framework. His years as president, dominated by the Civil War and personal loss, led Lincoln to move into a world beholden to Providence.

2015 ISHS Superior Achievement Award. Part of the Southern Illinois University Press series, The Concise Lincoln Library. This exciting series brings together expert scholars to elaborate on the life, times, and legacy of Abraham Lincoln. Each book gives readers the opportunity to quickly achieve basic knowledge of a Lincoln-related topic. In an effort to make new scholarship accessible to the widest audience possible, the books carry minimal endnotes and historiography and are written in a style that is easy for anyone to understand. In-depth yet accessible, the Concise Lincoln Library appeals to both the novice and the Lincoln scholar.