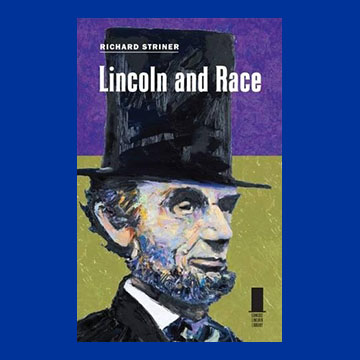 Looks at Lincoln’s Mind, Heart and Motives Regarding Race

In Lincoln and Race Richard Striner gives fair hearing to two prevailing theories about Lincoln’s seemingly contradictory words and actions: Did Lincoln fight a long-term struggle to overcome his personal racism? Or were his racist comments a calculated act of political deception? B

eginning with an exploration of the historical context of Lincoln’s attitudes toward race in the years before his presidency, Striner details the ambiguity surrounding the politician’s participation in the Free Soil Movement and his fight to keep slavery from expanding into the West. He explores Lincoln’s espousal of colonization–the controversial idea that freed slaves should be resettled in a foreign land–as a voluntary measure for black people who found the prospect attractive.

The author analyzes some of Lincoln’s most racially charged speeches and details Lincoln’s presidential words and policies on race and the hotbed issue of voting rights for African Americans during the last years of the president’s life. A brief but comprehensive look into one of the most contentious quandaries about Abraham Lincoln, Lincoln and Race invites readers to delve into the mind, heart, and motives of one of America’s most  fascinating and complex leaders.