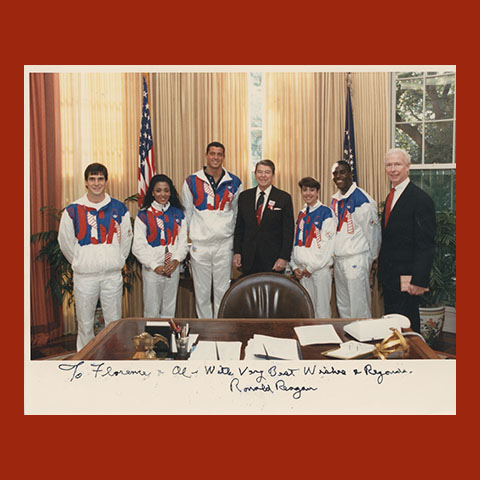 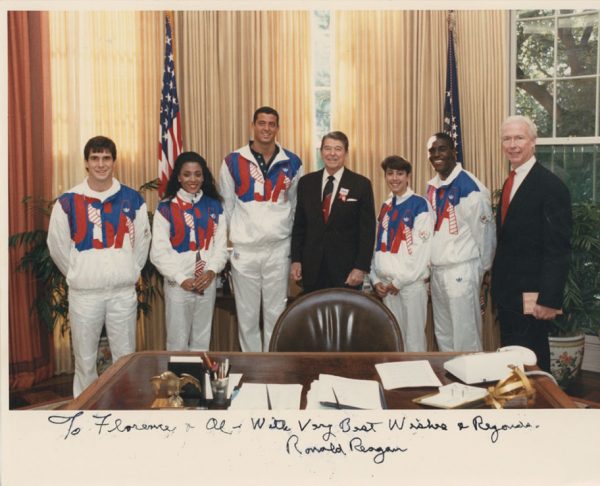 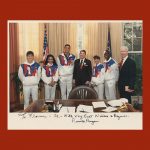 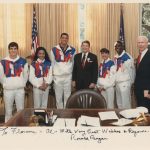 Ronald Reagan inscribes and signs a photograph to the late Florence Joyner and her husband, Al. Al Joyner won the Gold Medal for the Triple Jump in the 1984 Olympics. Ronald Reagan is in the Oval Office standing behind his desk with the Joyner, and other members of the team. The late Olympian, Florence Joyner’s 1988 record for both the 100 meter and 200 meter still stand today. She won three gold medals in the 1988 Olympics. Florence Joyner passed away in 1998.

Our current group of female athletes owe much to “Flo-Jo.” She kept her hair long, and wore jewelry in a sport that historically favored speed over personal expression. She achieved both, flawlessly. Her adventurous fashion acumen paved the way for Serena and Venus Williams’ exciting choices. Serena’s 2021 Australian Open single bare-leg look echoes Flo-Jo’s “one legger” from the late ’80s.

Inscribed clearly in ink on the mount below, though this one has some feathering from Reagan placing another photo on top for signing while the first was still a bit wet; the top photo shows slight ink ghosting on its verso.