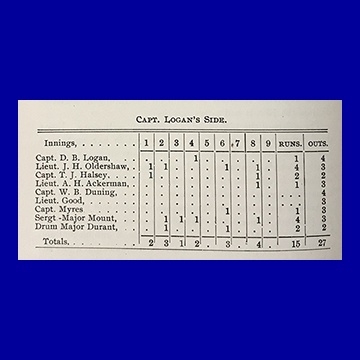 A Regiment From New Jersey fights at Gettysburg and Beyond

Thomas Marbaker wrote about the 11th New Jersey Volunteers, raised in 1862, and veterans on the Army of the Potomac’s III and II Corps.

The regiment featured Colonel, later General, Robert McAllister. Their commander led them to such battles as Gettysburg, where they fought in the Peach Orchard area on July 2, and Grant’s Overland Campaign. In addition to the thorough account of operations, Marbaker discusses life in camp, and even provides the box score to a regimental baseball game.

“A useful volume for the later campaigns in Virginia.” “ James I Robertson.

Marbaker, Thomas D. HISTORY OF THE ELEVENTH NEW JERSEY VOLUNTEERS, FROM ITS ORGANIZATION TO APPOMATTOX, TO WHICH IS ADDED EXPERIENCES IN PRISON LIFE AND SKETCHES OF INDIVIDUAL SOLDIERS. Trenton: 1898. 1st edition, 364p., frontispiece, illustrated. [Dornbusch-46]