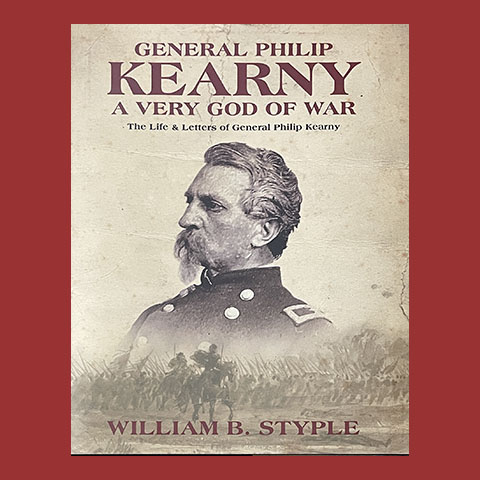 “…the Bravest Man I Ever Knew, and a Perfect Soldier.”
–Lt. Gen. Winfield Scott

Phil Kearny was an ideal soldier. The military spirit was born in him, and it was cultivated. He was a man of dash and of daring, a leader whose presence inspired courage. Trained to the law, equipped with a large share of worldly goods, he preferred a fighting career to one of peaceful pursuits.

Upon inheriting a fortune at age 21, Kearny forgoes a life of ease to enlist in the 1st U.S. Dragoons serving in the American West. Sent to France to study the art of war in 1839, Kearny served with the famed Chasseurs d’Afrique in Algeria, and later campaigned with the French in Italy in 1859.

Despite the loss of an arm in the War with Mexico, Phil Kearny was one of the first to offer his services when the Civil War broke out; he went to the front as commander of the First New Jersey Brigade. His record in that conflict to the day of his tragic death was one of brilliance and honor.

He won distinction despite the fact that he was assailed by jealous superior officers (West Point Engineers) as a mere “soldier of fortune,” a reckless and unsafe leader. Kearny was never a soldier of fortune. He was a soldier with a fortune. His men swore by him. They followed him with cheers when he led them into the thick of the fight. He saved the day on more than one battlefield where the fate of the nation seemed to be at stake.

Kearny was not a man of model morals. He had serious faults but none of them detracted from his right to eminence as a soldier. He knew no fear. He was inspired with liberty. He believed in striking “till the last armed foe expired.” His personal magnetism, his military bearing, his record of valor and the marks of the conflict that he bore, all contributed to making him the ideal soldier of his day.

He was not a Napoleon, or a Duke of Wellington, or a Scott or a Grant, but as a fighter who forged confidence and encouraged others to deeds of martial valor for their country, he stood in the front ranks of the heroes of the American army. His methods were spectacular, as one admirer wrote, “Kearny afforded an inspiration that equaled a legion in the field.”

As New; Signed by Author.

Things to Know About Ordering This Book:

You must order this book by December 15 in order for it to arrive in time for Christmas.