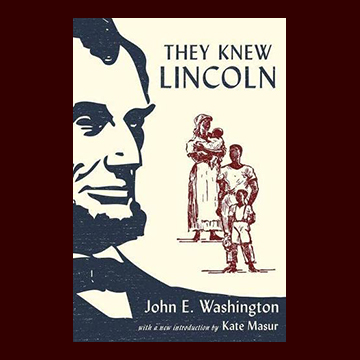 They Knew Lincoln is a classic in African American history and Lincoln studies. Originally published in 1942, reprinted for the first time, it is part memoir and part history. The book is an account of John E. Washington’s childhood among African Americans in Washington, DC, and of the black people who knew or encountered Abraham and Mary Todd Lincoln.

Washington recounted stories told by his grandmother’s elderly friends–stories of escaping from slavery, meeting Lincoln in the Capitol, learning of the president’s assassination, and hearing ghosts at Ford’s Theatre. He also mined the US government archives and researched little-known figures in Lincoln’s life, including William Johnson, who accompanied Lincoln from Springfield to Washington, and William Slade, the steward in Lincoln’s White House.

Washington was fascinated from childhood by the question of how much African Americans themselves had shaped Lincoln’s views on slavery and race, and he believed Lincoln’s Haitian-born barber, William de Fleurville, was a crucial influence. Washington also extensively researched Elizabeth Keckley, the dressmaker to Mary Todd Lincoln, and advanced a new theory of who helped her write her controversial book, Behind the Scenes.

A new introduction by Kate Masur places Washington’s book in its own context, explaining the contents of They Knew Lincoln in light of not only the era of emancipation and the Civil War, but also Washington’s own times, when the nation’s capital was a place of great opportunity and creativity for members of the African American elite.

On publication, a reviewer noted that the “collection of Negro stories, memories, legends about Lincoln” seemed “to fill such an obvious gap in the material about Lincoln that one wonders why no one ever did it before.” This edition brings it back to print for a twenty-first century readership that remains fascinated with Abraham Lincoln.