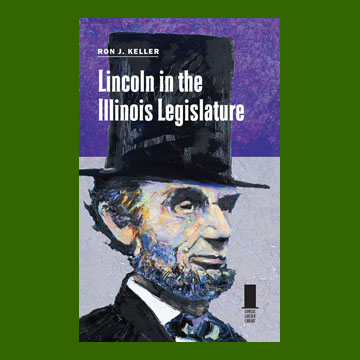 In Lincoln in the Illinois Legislature Ron Keller reassesses Lincoln’s arguably lackluster legislative record during four terms in the Illinois House of Representatives to reveal how the underpinnings of his temperament, leadership skills, and political acumen were bolstered on the statehouse floor.

Due partly to Lincoln’s own reserve and partly to an unimpressive legislative tally, Lincoln’s time in the state legislature has been largely neglected by historians more drawn to other early hallmarks of his life, including his law career, his personal life, and his single term as a U.S. congressman in the 1840s. Of about sixteen hundred bills, resolutions, and petitions passed from 1834 to 1842, Lincoln introduced only about thirty of them. The issue he most ardently championed and shepherded through the legislature –the internal improvements system–left the state in debt for more than a generation.

Despite that spotty record, Keller argues, it was during these early years that Lincoln displayed and honed the traits that would allow him to excel in politics and ultimately define his legacy: honesty, equality, empathy, and leadership. Keller reanimates Lincoln’s time in the Illinois legislature to reveal the formation of Lincoln’s strong character and political philosophy in those early years, which allowed him to rise to prominence as the Whig party’s floor leader regardless of setbacks and to build a framework for his future.

Lincoln in the Illinois Legislature details Lincoln’s early political platform and the grassroots campaigning that put him in office. Drawing on legislative records, newspaper accounts, speeches, letters, and other sources, Keller describes Lincoln’s positions on key bills, highlights his colleagues’ perceptions of him, and depicts the relationships that grew out of his statehouse interactions. Keller’s research delves into Lincoln’s popularity as a citizen of New Salem, his political alliances and victories, his antislavery stirrings, and his personal joys and struggles as he sharpened his political shrewdness.

Keller argues Lincoln’s definitive political philosophies–economic opportunity and the right to rise, democratic equality, and to a lesser extent his hatred of slavery–took root during his legislative tenure in Illinois. Situating Lincoln’s tenure and viewpoints within the context of national trends, Keller demonstrates that understanding Lincoln’s four terms as a state legislator is vital to understanding him as a whole.

Part of the Concise Lincoln Library.